The levers that move the flaps that are inside the intake of my Egg were sticking causing sluggish acceleration.  Recently was getting some really bad gas mileage also so I am hoping that this is the culprit.   I found a site online that helped me get through the process of freeing them up.  As you can see in the pictures below, I have the upgraded rods that connect the vacuum actuator to the lever.  Also the lower actuator is not completely pushed out in these pictures because it is damaged and I had to replace it. 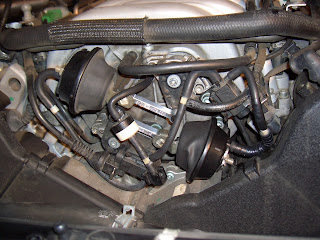 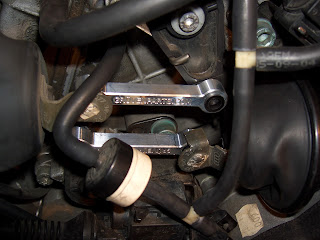 Today, the top lever was sticking to the point that It would not return completely to the position you see in the top picture.  This is the way it should look when the engine is off.  At idle, both vacuum actuators will be completely sucked in actuating the levers to the full open position.

After my test drive, I will see if this will help my gas mileage problem.

On an other note, those vacuum actuators wear out by getting a slit in them or some other type of vacuum leak.  And that is what it becomes, a vacuum leak not to mention that your flaps will not will not work either due to no actuating.  I found them on a Land Rover site for significantly cheaper than vw.  Vw wanted several hundred dollars for each and there are no aftermarket that I could find.  The Land Rover site wanted about $90 or so each.  They are the exact same thing for the Land Rover except for a spring that is inside the bellow.  I have found that the spring does not change the actuating action enough to change the performance of the Egg and I have been using the Land Rover parts for more than 50K miles now.  The Land Rover used these for cruise control I believe.