Risking a fixed crack in a case

I had sent my case to Adrian at Headflow Masters to be checked and he found a crack behind #1.  That is not the normal location for cracks.  You would think behind #3.  I now understand more as to what the reasons are for the cracks behind #3 and other cracks, so this crack behind #1 does not make a lot of sense why it is there.  It is not a stressed area.

Adrian stated that he has fixed these before but not sure of the reliability of the fix.  He welded a plate (Al I believe) behind the #1 as seen below. 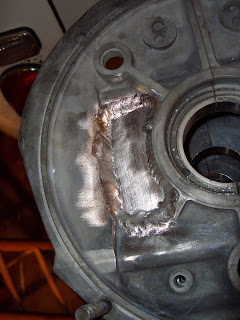 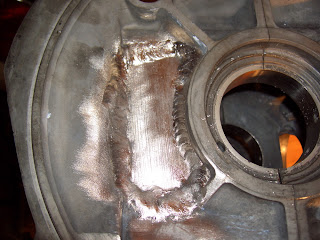 As you can see, this is the same modification that is done behind #3 to prevent cracks normally.  You can also notice that an align bore was done as the welding most likely moved things a bit.  The thrust surface was good and did not need machining.  So I have the case back and it is ready to be cleaned with soap and water and make sure all the oil passages are clear and clean.

Adrian showed me some other mods he is doing to cases to make them stronger.  They appear to be something I would like him to modify my case sometime in the future.

I also had the crank sent out for grinding and they communicated that it was cracked all over and was no good.  I obviously had to buy new.  Adrian was doing this leg work for me and had called me to tell me the bad news, I had to make a decision between a chinese crank, stock, counter weighted chinese or brazilian cranks.  I had the brazilian counter weighted before and choose it again. 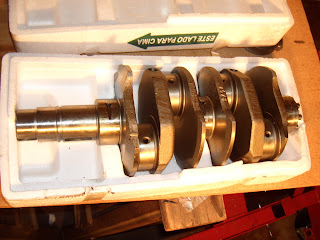 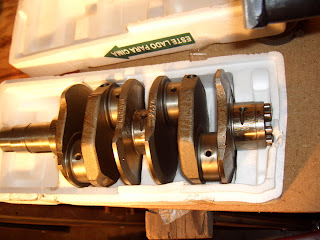 There is a coating on the crank that I will have to clean off before any kind of assembly can happen.  Notice the eight dowels for the flywheel.  This is what I had before. 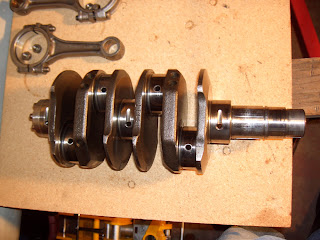 It did not break but I guess it was cracked.  I did not know how to do the ring test well until I received the new one a day ago.
1 comments
Newer Posts Older Posts Home
Subscribe to: Posts (Atom)